Working with a Designer

Posts to help you work seamlessly with your designer or pick up some DIY tricks yourself! 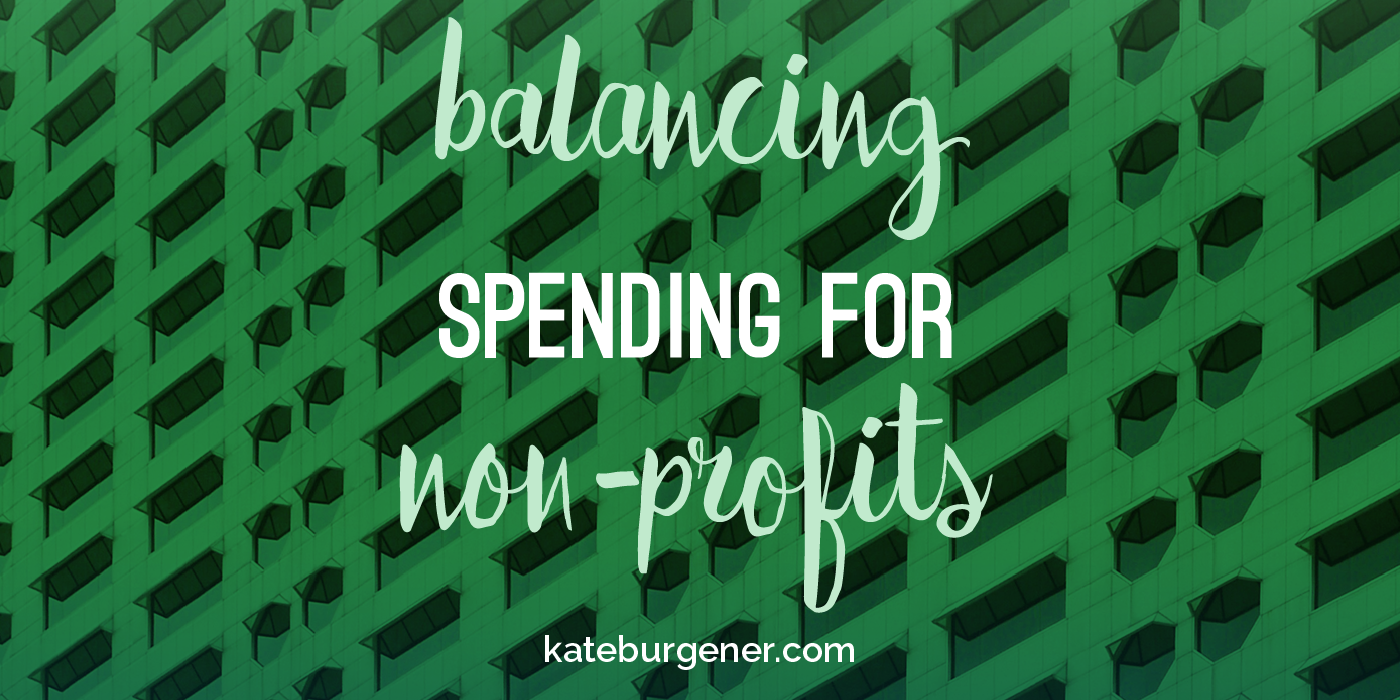 The non-profit world is so tricky. Generally you’re working with a fairly tight budget, some of which comes from donations or grants. You’re always competing with similar non-profits for valuable commodities: people’s attention, membership, and donations. You’re doing important work and it’s so tempting to pour every last penny into supporting programs.

Design for non-profits is a tightrope. A non-profit who is trying to bootstrap their materials (informational brochures, program content, social media graphics, websites) may be missing out on the benefits of a more professional approach. But an organization who pours money into their materials can come off as spending too much on the peripherals and overhead and not enough on the programs people want to see supported.

There is nothing wrong with being scrappy and bootstrapped. Every non-profit has to start somewhere and that somewhere usually does not include a budget for an on-staff design team making sure your materials are beautiful and cohesive. But as soon as you have the cash flow to consider bringing  professional help into your organization (whether hiring a freelancer or agency for a single project, a retainer, or investing in a salaried employee), there are some compelling reasons why you should act.

The reality is this: you are competing for attention and support. A person presented with two campaigns where one is a little roughshod and not lovingly crafted and the other is more thought-through and cohesive, the likelihood is that they are going to support the more polished program. Design can indicate legitimacy. (Not always, there are obviously lots of slick-looking total shams out there.) Organizations that look like they have it together and are communicating with intentionality will engender more confidence that they are putting thought and care into where donation money goes and how they approach their mission. However…

A few years ago, my husband donated a modest sum to a major medical foundation. (Let’s not put anyone on blast here.) It wasn’t a lot, between $25-50, just a sum that had come to us that he wanted to pass on to the foundation. I think he noted it somewhere for taxes (back when itemizing deductions was useful) and we moved on with our lives.

About 6 weeks later, we got a large envelope in the mail addressed to him. The postage was not cheap, and the envelope was stuffed with swag from the medical foundation. A tote bag, pens, a frisbee, a pile of program materials, temporary tattoos (my kid did get a kick out of those), and more. My husband and I stared agog at the pile. Even with economies of scale for promotional items (I’ve ordered a branded tote bag or 1200 in my time), it was clear between the postage, the contents and the staff member that had been paid to assemble and mail it, at least 70% of his donation had gone to this kit “thanking” him for his generosity.

We’d much rather the money have been used directly to support the research and support programming that we admired about the medical foundation. They do important work, but their response to a modest donation made us think they perhaps were not using their budget very responsibly. This thank you packet, probably intended to spur future donations, actually made us less likely to want to donate again.

It’s not about the tote bag

What non-profits need to understand is that in general, when people are writing a check or popping their credit card details into a form, that act alone is choosing to support the work of the organization. A thank you letter would not be amiss, put them on a mailing list to keep them apprised of additional ways to be involved (by donating more money, volunteering, being an advocate, etc). Give them a chance to engage more by inviting them to events.

Consider branded promotional items to be most useful to people who currently have a low knowledge of your organization. Visitors to expos or events where a lot of organizations are present may pick up your item and have a conversation with you to learn more about the work you do in the community or around the world. That useful promotional item may serve to remind someone of you and your work when they pick it up and use it, or someone sees them using it. (Also, put some thought into it. I once worked with a company that purchased branded cowbells to distribute to people cheering marathon runners. It was amazing and we had people talking about that for months and even spotted them along the course the following year.)

But the person who has already handed you a donation doesn’t need that. Growing up, my parents donated frequently to PBS and NPR and we had tote bags and umbrellas for days. My parents never donated because they were in need of an additional umbrella. They supported the mission of those organizations and were proud to make a financial commitment.

So you want to look professional but not like you poured people’s donations into frivolous expenditures. Communicate about your non-profit clearly and professionally, with some polish and enough design to make it look memorable, but don’t use donations to foot the bill for unnecessary promotional items, expensive printed pieces without justification, or congratulatory items. Your big donors might enjoy being thanked and recognized, but mostly just want to see their money supporting the work that you do that changes and improves people’s lives. 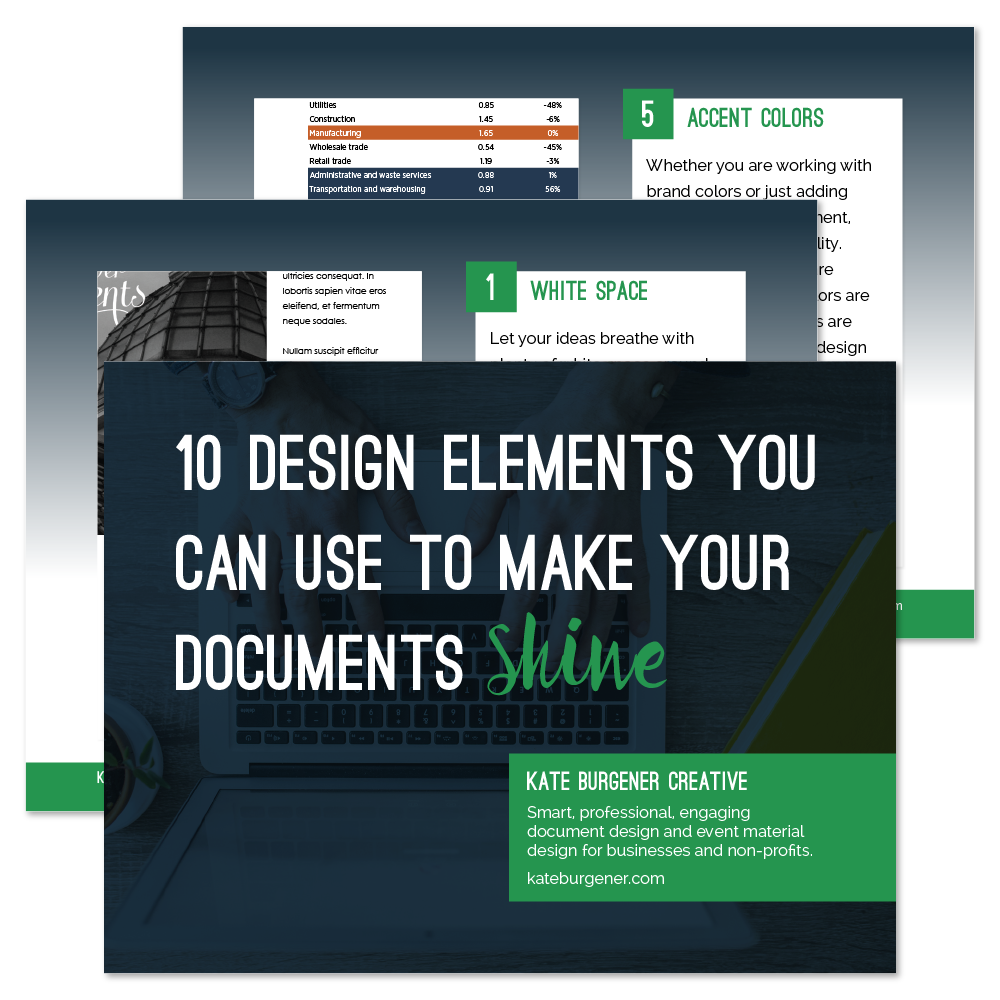 10 Design Elements You Can Use to Make Your Documents Shine

Get tips and tricks to make your documents look professional and polished!

10 Design Elements You Can Use to Make Your Documents Shine

Get tips and tricks to make your documents look professional and polished!